A price cap on Russian oil, crypto regulation, huge Disney shake-up… it’s been an incredible week in the markets.

High inflation is still the primary concern of all investors yet there may be light at the end of the tunnel.

Meanwhile, Disney is experiencing a major shake-up as it not only ousts its existing chief but brings back its former CEO.

We take a look at some of the major market trends this week.

The oil price dropped on November 24, hovering around two-month lows, as the Group of Seven(G7) nations’ proposed price cap on Russian oil was higher than current market levels. This caused concerns over tight supply, reducing the oil price.

Greater-than-expected US gasoline inventories and lifting COVID-19 restrictions in China added to the downward pressure on oil.

The G7 is looking to cap Russian seaborne-oil deliveries at $65-$70 a barrel though European Union governments have not yet agreed on a price.

A higher price cap will encourage Russia to sell its oil, reducing the risk of a huge supply shortage in global oil markets in December and beyond.

The crash of the FTX cryptocurrency exchange has injected greater urgency into regulating the crypto sector.

Jean-Paul Servais, chair of global securities watchdog IOSCO, said that “conglomerate platforms” will be the focus for 2023.

Regulating crypto platforms could draw on principles adopted by other market sectors such as conflicts of interest.

Cryptos such as Bitcoin and exchanges have been around for years but have up to now avoided strict regulation as seen in mainstream markets.

The implosion at FTX, which has left an estimated one million creditors facing losses of billions, could help change that by introducing regulation from 2023.

Want the latest market updates? Listen to our daily podcasts

Chapek has been in the position for less than three years. His ousting follows a series of business missteps and weak fourth-quarter results for the company.

Iger, at the helm of Disney from 2005, delayed his retirement until July 2019, to give the board time to search for a successor.

How to trade the markets

2 Check out the new stocks on the trading dashboard

Roslyakov said: “Coming off a second straight negative showing Monday futures are slightly higher to start this despite further negative covid reports out of China. Stocks were lower to start the week, the Dow losing 45 points, and the S&P 500 and Nasdaq Composite slid 0.4% and 1.1%, respectively. This evening we’ll look at Fed officials making prepared statements at 21:00 SAST.

“The market has keyed in on these of late looking for any indications or clue that the Fed could slow its rate of aggressive hikes in December. With the US celebrating Thanksgiving tomorrow and consequently stock markets being closed on the 24th and early close (1:PM) on Friday, we expect engagement in the markets to be higher than usual today as we move further into the holiday season. “

“All of these announcements will be expecting a high amount of volatility on the Global economy and their associated currency pairs.

Putting a spotlight on the ZAR:

“South African CPI figures announced on Tuesday missed their expected results with Core CPI figures rising 3 percentage points to 5% (YoY) and staying stagnant at 0.5 % (MoM), unlike the decrease in the US, signaling a continued struggling economy as it battles inflation. This may also indicate a rate hike of 0.75 b.p is likely and potential for an even greater hawkish stance of 1%.

“Technically we are looking at breaking through the volume range with a break of 17.105 signaling a further downside move towards 17 flats as the Rand finds strength against its Dollar counterpart.” 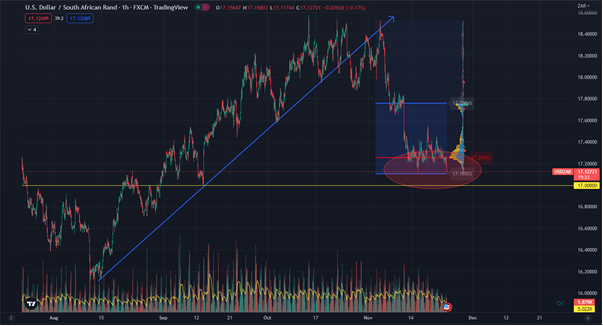 Roslyakov said: “Crude oil prices curtailed earlier gains and dropped 2% on Wednesday as the West weighed in on a price ceiling for Russian oil, potentially looking to limit the price to $60 per barrel, according to reports.

“The US and its allies are likely to announce their decision later today, as they look to agree on the level of the ceiling before December 5. Moscow stressed that they will not supply oil under the price cap which could spark supply concerns in global markets.

“WTI trading at monthly lows around the $78 per barrel mark. This is a sharp decrease of just under 16 % from the highs of November 7th. We look at a bottom line of support of $76 for the commodity.” 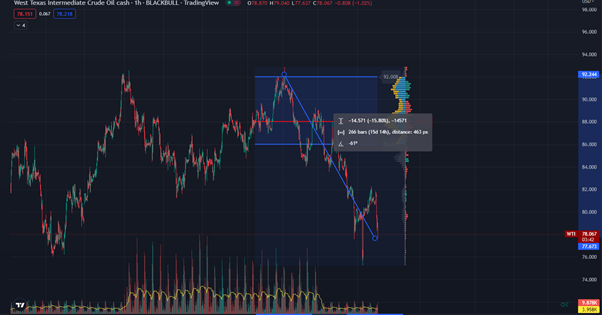 Roslyakov said: “Bitcoin and its Crypto underlings continue to see massive pressure on the back of the fall out of the FTX exchange.

“FTX founder and former CEO Sam Bankman-Fried ‘froze up in the face of pressure’ as his company collapsed, he wrote in a new letter sent to employees of the company he once commandeered.

“In the letter, shared internally in FTX’s company Slack and obtained by CoinDesk, Bankman-Fried said he felt “deeply sorry about what happened” and what that meant for the company’s employees. He did not address allegations that FTX diverted customer and corporate funds to prop up Bankman-Fried’s Alameda Research.

“BTC looks to continue to test and retest the 15500 level as it looks for any kind of bullish participation to bring the struggling crypto industry back up to par with its pre and early 2022 levels.”

Roslyakov said: “Looking forward; Retail sales figures, German macroeconomic results, and South African Interest Rate Decisions will provide traders with enough volatility and trading opportunities to take advantage of, even with the Thanksgiving holiday break in US stock markets for the rest of the week.

“Traders can look at finding opportunities in the FX and Commodity markets as the greenback sees continued downside pressure as well as the ever-volatile Crypto market that looks to rebound from the catastrophic events created by FTX’s bankruptcy.

“Trader should be wary of the decreased volumes during the holiday season. Adapting approaches to understand that apparent market mover based on low volumes need to be dealt with caution. Look for high intraday relative volumes, confluence, and significant results as indicators for entering positions as these will be apparent for the global market this week forward.”