The forex market is the largest and most profitable financial market in the world.

Open your forex trading account with CMTrading and enjoy a superior trading experience with an award-winning broker!

What Is Forex Trading?

Forex or foreign currency exchange refers to currency trading via the forex market. The forex market is the world’s largest financial market where all of the world’s different national currencies are traded. The exchange rates between currencies are influenced by a range of different factors including inflation, interest rates, government policy, employment figures and demand for imports and exports. Because of the sheer volume of forex traders and the amount of cash exchanged, price movements can happen very quickly, making currency trading not only the largest, but also one of the most volatile financial markets in the world.

Forex trading involves speculating on the exchange rate between two currencies, which are traded as a single asset and commonly referred to as a forex or currency pair.

Unlike other financial assets such as stocks, commodities or bonds, forex trading always involves the combination of two different currencies.

The most commonly traded forex pair is the EUR/USD, which tracks the exchange rate between the Euro (EUR) and the U.S dollar. 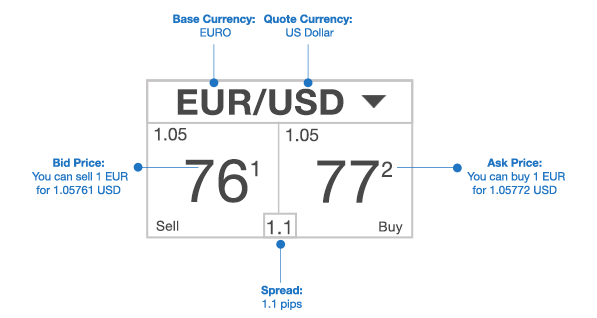 EURUSD represents the value of €1 in Dollars. Therefore, if the EURUSD exchange rate is quoted at 1.05, that means that €1 is worth $1.05. If the exchanged rate rises to 1.40, that will indicate that the Euro has strengthened against the Dollar, as €1 is now worth $1.40.

When traders buy or sell the EURUSD pair are actually speculating on the movement of the exchange rate between the euro and dollar.

Therefore, if you open a buy position in EURUSD and the euro rises against the dollar (the value of €1 rises in relation to the $) you will make a profit on the trade.

However, if the euro weakens against the dollar, your position will result in a loss.

WHAT CAUSES EXCHANGE RATES TO FLUCTUATE?

Since forex trading involves benefiting off of the increase or decrease in the exchange rates of different currencies, it is important to know why this exchange rate may fluctuate.

The answer to this question, for the most part, is supply and demand; when there is more demand for one currency than another, it will cause the exchange rate values to move in favor of the currency that is currently in demand.

For example, when the catastrophic earthquake and subsequent tsunami hit Japan, the value of the Japanese yen rose against other major currencies. This was due to the fact that Japanese companies that had investments out of Japan had to quickly bring their money back into Japan to pay for repairs and insurance liabilities.

These companies converted their foreign holding into yen in the process. As a result, there was a sudden spike in demand for Japanese yen. The demand caused yen exchange rates to change rapidly as a result.

The main drivers behind fluctuations in the forces of supply and demand are economic trends, geopolitical events, and changes to market sentiment. The most important scheduled events that can affect the financial markets can be tracked on the economic calendar.

Listed below are some of the most common key terms used in forex trading:

Forex is usually quoted in pairs, pitting one currency against another. Take for example the pound sterling vs. the U.S dollar – the rise and fall in the exchange rate between these two currencies is what a trader aims to take advantage of.

The first currency in a currency pair is also known as the base currency and is the one that forms the basis for a trade.

In case you believe that the base currency’s value will drop against the quote currency, then you need to open a sell position to take advantage of the falling exchange rate.