The world’s greatest football event will take place on November 20 as billions tune in to watch the 22nd quadrennial Men’s FIFA World Cup. What makes the 2022 edition of the FIFA World Cup special is that not only is it a Winter event, but it will be held in the Middle Eastern nation of Qatar.

The four-week-long event is expected to see hundreds of thousands visit Qatar as well as billions of viewers watching and streaming across 200+ countries.

Ahead of the world’s most-watched sporting event, we take a look at the staggering investment by Qatar to host this incredible tournament. What’s more, we’ll share top trading opportunities for all traders at the end of this article. 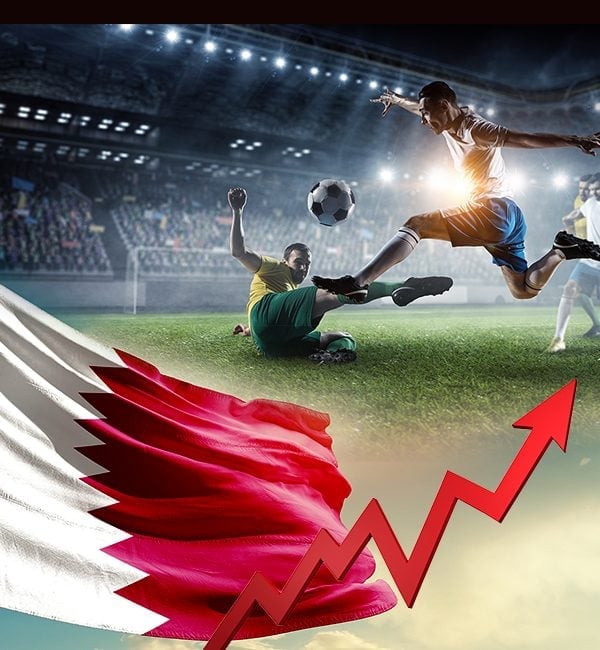 One of the biggest questions on fans’ minds is “how much is Qatar spending on the FIFA World Cup 2022?’. Qatar is a small nation with a tiny population of just 2.8 million residents. Due to the country’s size and vast oil reserves, it is the richest in the world in terms of per capita wealth.

Yet even for a country as rich as Qatar, the 2022 FIFA World Cup required massive investment; so far, the country has spent about $200 billion. That’s a mind-boggling amount when you consider that Russia, the previous host of the soccer tournament, spent $11 billion back in 2018.

Where has the $200 billion been spent? Well primarily in huge infrastructure and construction projects. Qatar has built a new city, Lusail, to host the finals of the World Cup. According to the Qatar government, the country is spending the equivalent of $500 million each week leading up to the tournament on creating new hospitals, hotels, airports, and, most importantly, several new stadiums.

The major investment could pay off economically as Qatar’s GDP is set to rise by 4.1% by the end of 2022. According to FIFA officials, the tournament will generate $20 billion pumped back into Qatar’s economy.

$20 billion: The estimated revenue Qatar will generate for hosting the World Cup. FIFA is expected to generate $7 billion in revenue for the event.

1.2 million: Qatar estimates 1.2 million visitors during the tournament, that’s more than half its current local population.

4468: The size of Qatar is square miles making it the smallest country to host the World Cup yet.

1300 – The expected number of daily flights throughout the World Cup.

84: The average high temperature (in Fahrenheit) in Qatar in November.

26 – 21: The average temperatures (in degrees Celsius) in Qatar during November and December respectively.

In a report, the S&P said: “We also foresee a post-World Cup slowdown in economic activity in Qatar. Oversupply in the hospitality and real estate sectors could somewhat moderate their performance, although we don’t expect this to materially affect banking sector asset quality.

“We estimate real GDP growth of 4.8% in 2022, a sharp increase on 2021 (1.5 percent), partly due to the additional economic activity associated with the World Cup, but also reflecting the ongoing recovery following the removal of COVID-19-related restrictions. We estimate non-oil GDP growth in 2022 at 8 percent, compared with close to 3 % in 2021.”

The world cup presents unique trading opportunities, especially for the GCC sector. From Forex to construction stocks, traders of all levels will be seeking opportunities

How can you take advantage of the upcoming FIFA world cup? By trading 20 of the top stocks featured on the Saudi Exchange available on our platform

These represent some of the most valuable companies in the world and offer a unique opportunity to diversify your portfolio.

How to trade the top Arab stocks

2 Check out the new stocks on the trading dashboard

Below are the new stocks on our platform: