Wall Street’s main indexes gained on November 16 while Europe is rattled by an unconfirmed report of Russian missiles striking Poland.

The missile strike sparked volatility in Europe and the Forex market.

Traders are considering softer-than-expected inflation data, raising hopes of a pullback in rate hikes by the US Federal Reserve.

We take a look at the financial markets and bring you all the major market news and events you need to know.

US President Joe Biden said that the missile that killed two people in Poland may not have been fired by Russia. That comment could relieve a market rattled at the prospect of the war in Ukraine spilling over to neighbouring European countries. Investors remain on guard and the FX market reflects that.

The explosion at a grain facility near the Ukrainian/Polish border translated into a volatile round of trading; equities traded lower, the US Dollar gained in strength, and gold prices near a three-month peak.

US GEO-politics are ablaze as former US president, Donald Trump, launched his bid to regain the presidency in 2024. “Two years ago, we were a great nation and soon we will be a great nation again,” he said during a speech. Markets however seem unfazed by the news.

The UK is due to release inflation data for October on Nov 16. Analysts expect to show consumer prices up 10.7% compared to a year earlier. The inflation report will come a day ahead of Finance minister Jeremy Hunt’s autumn budget set to include tax rises and spending cuts.

The cryptocurrency market continues to feel the fallout of the FTX saga. Bankruptcy filings show the collapsed exchange may have more than 1 million creditors.

Roslyakov said: “The unemployment rate in the United Kingdom dropped by 0.2 % in the quarter ending September, down from 3.8% in June compared to the previous quarter settling at 3.6%, reported on Tuesday.

“The employment change came in at -52000, more than double the estimated reading.

“In terms of technical data, for GBP/USD there is potential for a breakout from resistance levels of 1.8600 for a bullish push from the pound.

“Short-term support is maintained at 1.16 flat as we await core inflation rates forecasted to be lower YoY to be announced on Wednesday. If the announcement is in line with US data, traders can expect depreciation in Sterling with a move down to the abovementioned support and a bullish movement in the FTSE.” 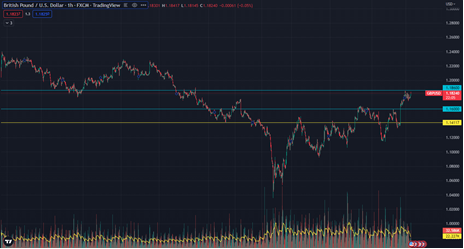 Roslyakov said: “The prices of oil futures slid on Monday after OPEC revised down its world oil demand growth projection for 2022 to 2.5 million barrels per day.

“The French Consumer Price Index (CPI) went up by a record 6.2% in October YoY, up from September’s annual inflation rate of 5.6%. Increases in energy prices reached 19.1% YoY continues to hurt the population, with the increase in inflation also driven by increased food prices which climbed 12.0%.

“The annual inflation rate in Spain met expectations at 7.3% in October after declining over 1.5% compared to September. Similarly, to their Euro counterparts, the price increases of food and non-alcoholic beverages annually soared by 15.4%.

“The CAC 40 and IBEX 35 are currently in consolidation after Friday’s bounce back. The CAC and DAX leading the way in the Eurozone appreciating 17% and 20% respectively since the beginning of October.”

Roslyakov “Alibaba (BABA) is scheduled to release their earnings covering the three months to the end of September before the US market opens on Thursday. It is worth mentioning the important developments that have bolstered Chinese firms and raised hopes that the outlook in China is improving. Last week it was announced that some of the latest Covid 19 restrictions have been loosened. Quarantine times have been reduced. Fines for airlines bringing in cases have been decreased, and it has stopped tracing secondary cases.

“Analyst Consensus ratings of BABA at a “BUY” over the past 3 months provide confluence to the positive expected earnings:

Roslyakov said: “Amazon.com Inc. is planning to lay off approximately 10000 of its employees soon starting as early as this week, the New York Times reported on Monday. The cut would be the largest one in the tech giant’s history.

“This report may indicate a recovery in the stock after its battering since Mid-August, tumbling 41% from peak to peak. Investors may see the layoffs as a positive signal for the company as it restructures its operating business procedures away from “less profitable” divisions such as the device department after a review of its divisions was conducted earlier this month.

“AMZN looking to retest the $ 100-mark short term with long term targets on the back of improved US inflation figures with sights set at $135. The stock has a large amount of volume and resistance to get through however to reach these levels.”

Roslyakov said: “The Crypto space is still reeling from the debacle caused by the bankruptcy of the FTX exchange. This cataclysmic event has attracted the attention of lawmakers, regulators, and criminal investigators as they delve into exchange collapse.

“BlockFi confirmed on Monday it has “significant exposure to FTX and associated corporate entities” including “obligations owed to us by Alameda, assets held at FTX.com, and undrawn amounts from our credit line with FTX.US.”.

“Solana DeFi saw more than $700 million exit Solana-based applications, a 70% drop from the $1 billion in TVL (Total Value Locked) on November 2 after CoinDesk first reported on the collusion between treasury accounts at FTX and its sister company, Alameda Research.

“Technically we are looking at fulfilling the Falling Wedge bullish reversal pattern from BTC as the coin looks to regain its losses and test support turned resistance at 18500. Alternatively, more negative news for the Crypto market could see the coin tumble to the 14000-mark on a bearish triangle continuation formation.” 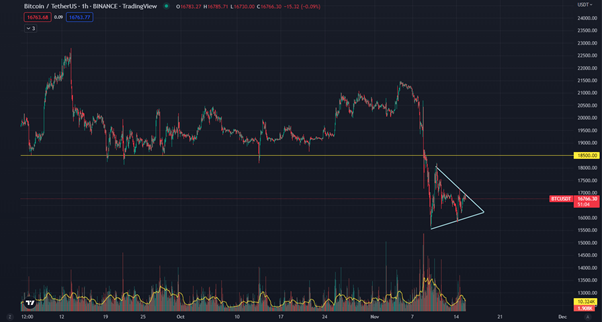 Roslyakov: “Looking forward; UK, Canadian, and EUROZONE inflation rates will grant some increased volatility in the markets, especially the USD FX pairs as traders determine the strength and outlook of the EU vs the greenback.

“Retail sales from the US are seen as a leading macroeconomic indicator with healthy retail sales figures typically eliciting positive movements in equity markets. Traders should be on the watch for the consumer sector constituents such as Walmart (WMT) and Amazon.com (AMZN) to be affected.”